I’ve been dreaming of Snowy Christmas…as soon as I started hearing reports of this year’s Snowy Owl irruption. Ah, the resplendent Snowy Owl! Sidekick to Harry Potter, this magical bird captures the whimsy of birders and non-birders alike. Snowys are the largest of North American Owls – a pound heavier than Great Horned Owls and 2X the weight of Great Gray Owls. Their abundance of white feathers keeps them warm in the arctic, including their slipper-like feet swathed in feathers. 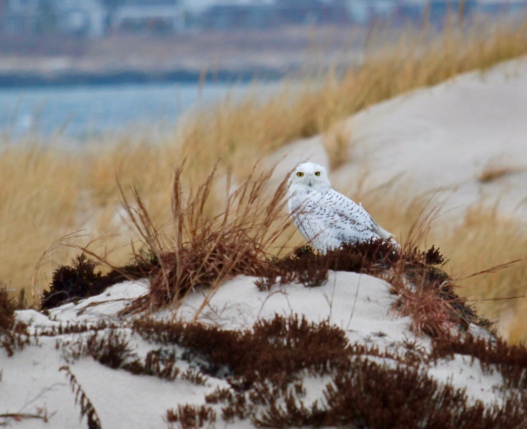 Four years ago, a huge influx of Snowy Owls made their way into the northern United States in numbers that hadn’t been seen since the 1920s. Snowys are owls of the Arctic, breeding from the Western Aleutians in Alaska to Manitoba and northern Quebec. They take advantage of the 24-hour sunlight of the Arctic Circle to hunt day and night, with a strong preference for lemmings. Although their migration patterns are largely mysterious, there is sufficient evidence to suggest they are embarking on these big southward movements approximately every four years – their clutch size increases from 3-4 eggs to 8-9 eggs following a population boom of their lemming prey.

So, here we are 4-years later and large numbers of Snowy Owls are storming into the northern US. I was scouring species maps on eBird before heading to NY for the holidays, and was ecstatic so see one Snowy Owl regularly reported at Jones Beach State Park. I arrived in NY, bundled up in many layers, grabbed my binoculars, and headed out. Upon arrival at Jones Beach, I felt like I was looking for a needle in a haystack. Snowys hunt in treeless open places and are most commonly found sitting on the ground. Just a short distance down a trail, and the Snowy Owl flew across the trail and landed in a nearby sand dune. It really was a breathtaking moment. I think anyone watching would’ve giggled as I jumped up and down and pranced down the beach after seeing this majestic bird in flight. I’ll be heading back again to tomorrow to see if I can catch one more look at this impressive bird before flying back west!

Read more about Snowy Owls and this year’s irruption at Project Snow Storm.

2 thoughts on “A Snowy Christmas”