This is another one of those catching up, all-over-the-place posts. Certain landscapes have etched a place so deeply in my heart that I find them difficult to write about. So, I procrastinate. The Sierra Nevada is certainly such a place. The vastness, diversity, and majesty of the Sierra Nevada defies description and requires that one experiences it….over and over and over again. In the past few weeks, I have explored the “Great Green Wall” of the western slope of the Sierra, marveled at mountain meadows laced with wildflowers and framed by mountain peaks, hiked to alpine lakes, and looked upon the Great Basin from the vantage of “The Other Side of the Mountain”, the dramatic and incomparable eastern escarpment. Of course, describing such things would be an easier task had I been writing regularly. Instead, I will try recapture some of my favorite moments, as I prepare to leave the Sierra for a brief stint in the Coast Ranges. 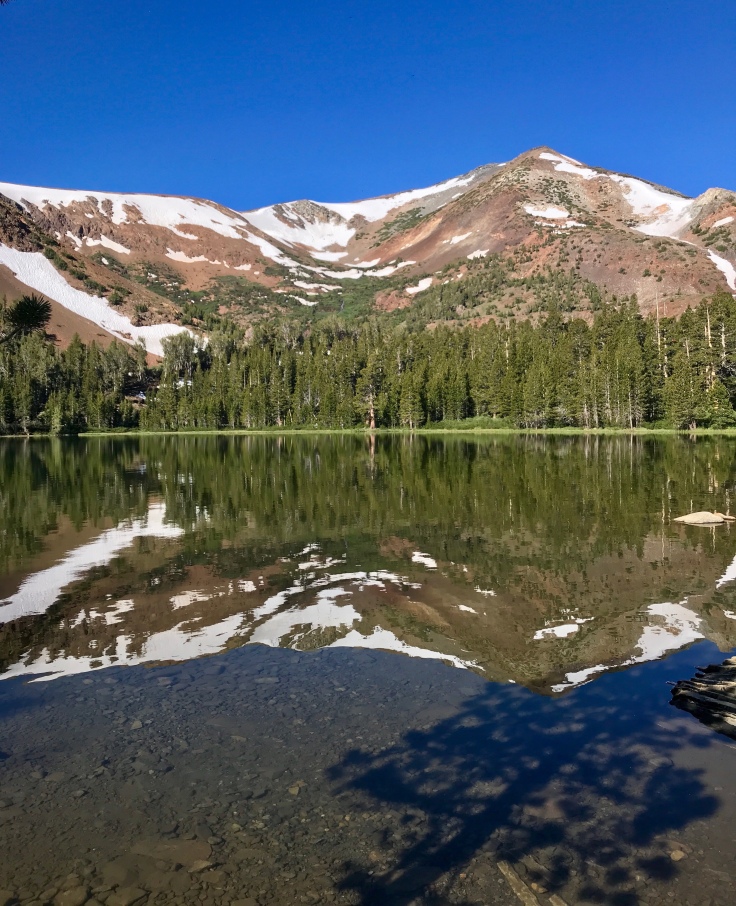 Owens Valley is hot this time of year, so I bypassed some of my usual stops and headed straight to Mammoth Lakes from Southern California. I spent a couple of days with a group of Sea and Sage Audubon birders on a whirlwind tour of birding hotspots in the Mammoth Lakes region. We started our morning before sunrise at Mono Lake County Park. Like me, this well-camouflaged Great Horned Owl just wanted to sleep, but instead was harassed by a pair of American Kestrels.

Lazuli Buntings warmed up their cheerful songs, Green-tailed Towhees bounced among the Great Basin sagebrush, and California Gulls soared over head as the sunrise reflected over the impossibly blue Mono Lake. A walk around Virginia Lakes afforded us the opportunity to scout some species of birds that are more typically associated with higher altitude – and to enjoy some beautiful views and wildflowers along the way.

I have always been fascinated by the plants that have adapted to the climatic, edaphic, and topographical conditions associated with alpine and subalpine landscapes; mountain hemlocks that persist on storm-battered ridges, foxtail pines with their short dense clusters of needles, flowers like sky pilot, alpine paintbrush, and small shrubs of the heather family that seldom stray from their alpine homes. Such plants tend to be prostrate and tough, and prepared to take advantage of a short growing season with a large investment in ephemeral reproductive structures. So, it is not surprise that the avian species associated with these environments would pique my interest. Perhaps one of my favorite of the “birds of the mountains” is the Clark’s Nutcracker, the chief Forester of the Sierra Nevada. Nutcrackers are gregarious Corvids that use their long, sturdy bills to crack open pine cones to release their staple food…pine seeds. And, they are very good at it. Most seedeaters would have to wait until fall when cones mature and open, but not Clark’s Nutcrackers! They pierce and pry until their food is dislodged and will shell seeds by holding them in their feet and hammering with their bill. And, they are hoarders that can store up to 150 pine seeds at a time in an expandable pocket below their tongues. Next, they will fly around and bury small clusters of seeds in various spots throughout the forest, caching up to 500 seeds per hour! Although their memories are quite impressive – they remember thousands of caching locations when the weather turns cold – they simply can’t remember them all, leaving many uneaten seeds buried throughout the forest. In this way, they are extremely important seed dispersers, sometimes hiding seeds as far as 20 miles away from the parent tree. This relationship is particularly strong with whitebark pines and with the myriad of forces negatively impacting forest ecosystems, Clark’s Nutcrackers may just be the restoration ecologists that are needed to sustain these critical systems.

While exploring Virginia Lakes, we also saw Mountain Chickadee, Hermit Thrush, Fox Sparrow, Dark-eyed Junco, Red-breasted Sapsucker, Pine Siskin, and Cassin’s Finch. During the 2+ weeks I spent in the Sierra, this was the only location where I saw Gray-crowned Rosy-Finches. These are “songbirds of extreme environments” that typically breed in remote alpine areas. Very little is known about their population size, distribution, and dynamics in the Sierra Nevada (but I met a graduate researcher from UC Santa Cruz who is just beginning to study this very topic!).

A few other birdy highlights at various places in the Mammoth Lakes region: White-headed Woodpecker and Townsend’s Solitaire at the Crestview Rest Area (off the 395), Lewis’s Woodpecker and Bald Eagles on a nest along Owen’s River Ranch Rd., sunrise at the Minarets Vista Area with a Brewer’s Sparrow and a flock or lifer Red Crossbills flying between Lodgepole Pines, and a variety of species along scenic trails at Devils Postpile National Monument including MacGillivray’s Warbler, Pygmy, Red-breasted, and White-breasted Nuthatch, Warbling Vireo, Olive-sided Flycatcher, Western Wood-Pewee, Mountain Chickadees feeding nestlings, Mountain Quail, Hairy and White-headed Woodpecker, and Red-breasted Sapsucker…to name a few!

We ended our whirlwind day of birding on the Mammoth Rock Trail and walked a very short distance to hear the low bass of the Sooty Grouse’s deep booming “hoots”. It took sometime, but we were able to locate the source of that bass….high up in a fir tree, where we could watch his rear vibrate with every boom. This happened to be within maybe 50 yards of last year’s Sooty Grouse encounter when, admittedly, we had a more intimate experience. We (unintentionally) flushed a male from the sagebrush and watched a behavior called ‘landing on a loud wing’, where a male will create an unusually loud noise at the end of a short flight….in this case, flying from the ground and landing in a tree. We also got a nice view of the orange/yellow bare patches on the side of his neck which are exposed during a display.

Okay, so at this point in our story the Sea and Sage folks have departed and I have a couple of items on my agenda: 1. Find the Grace’s Warbler, 2. Revisit Wildrose Canyon, and 3. Explore the Valentine Camp UC Reserve.

Around this same time last year, I visited Wildrose Canyon and had one of my more memorable birding experiences and so I was sure to revisit this spot again, as soon as my birding friends departed. Wildrose Canyon is in the Glass Mountains, east of Mammoth Lakes, off of Benton Crossing Road, en route to Benton. The slopes of this canyon are covered with Pinyon Pines and a creek bed running through the canyon is surrounded by an aspen grove and willow stands. Last year, we went in search of a reported Broad-tailed Hummingbird. We missed out on that bird, but I did see my lifer Calliope Hummingbird nectaring on some giant red paintbrush and nabbed some photos of a lifer Plumbeous Vireo. As we were wrapping up our visit, I wandered back toward the grove and scanned the canopy for the singer of a warbler spong. I must have had the sense I was being watched, as I dropped my binoculars and stared straight into the eyes of a juvenile Long-eared Owl perched on a pile of brush no more than 10 feet in front of me. Without taking a step, I snapped a few photos that coarsely whispered to my friends within earshot, “You guys….there is an owl…RIGHT IN FRONT OF ME!”. It remains one of my more spectacular encounters. 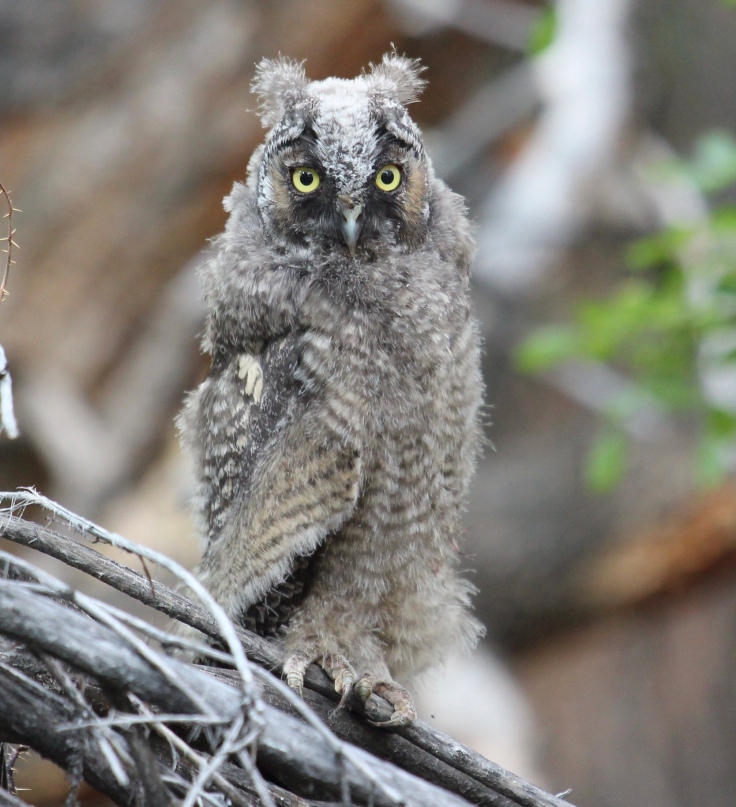 This year, Wildrose did not disappoint. Plumbeous Vireos sang and flitted through aspens and cottonwoods. Up and down the canyon, Lazuli Buntings sang their bouncy and cheerful song and, intermittently, popped up out of the shrubbery and flashed their iridescent blue and turquoise head and back. Such a jewel of a bird! No owls, but I added two new lifers to my list: Virginia’s Warbler and Black-chinned Sparrow. While east of the 395, I chased down a reported Grace’s Warbler (my first in California) and had an incredible encounter with a pair of Williamson’s Sapsuckers feeding a nestling, before heading back to Mammoth Lakes to explore the Valentine Camp Reserve.

The remainder of my time in the Eastern Sierra was spent at the Valentine Camp, a part of the University of California Natural Reserve System. I spent each morning, and a few evenings, walking a short trail that crosses a stream with a pair of American Dippers, a beautiful meadow edged with blooms and a pair of Western Wood-Pewee on a nest, a stand of Jeffrey Pines occupied by Steller’s Jays, and a sagebrush slope with mariposa lilies, paintbrushes, and wooly mule’s ears. Here is a smattering of pretty things I encountered along the way…..

During one particular walk, I paused in a location where there was a burst of bird activity. Simultaneously, a MacGillivray’s Warbler was calling and darting around the shrubs, Fox Sparrows were calling from the beneath the scrub, a Calliope Hummingbird buzzed around, I could hear a Mountain Quail calling in the distance, and a brightly colored male Western Tanager flew overhead. Moments later, I noticed a small owl fly in and land atop a dead fir tree. With all the other birds capturing my attention, he may have gone unnoticed were it not for the several Yellow-rumpled Warblers harassing him. He landed and I took a quick look thinking, “Hmmmm….that’s odd for a Northern Saw-whet Owl to be so active during the day”, knowing that fledglings were around the reserve. I was able to snap a couple of shots before the owl flew off, but just in time to catch the false eyes of a Northern Pygmy-Owl!

I left the Eastern Sierra via the Ebbets Pass, one of the less-traveled but most beautiful of the trans-Sierra routes. For my first night, I didn’t make it much further than the peak of the pass, and was lucky to nab a creekside campsite at Silver Creek. As I began to set up camp, I heard the ethereal fluting of the Hermit Thrush…the most beautiful of Sierra singers. “His song is of firs and pines darkening against the sundown sky”, says Elma Bakker. Not moments later, a pair of Evening Grosbeaks flew by, at eye level, and landed in a young Jefferey pine situated right next to my tent! They perched long enough for me to revel in their striking gold, yellow, black, and white plumage. I had hoped to encounter this bird this summer in the mountains, but thought I might have to wait until I made my way further north. What a treat! A perfect way to end my Eastern Sierra adventure. Up next: from the foothills of the Western slope to the north Coast Ranges (and at some point I must write more about my stay the Sedgwick Reserve that preceded this leg of my travels!). But first…a few more photos:

One thought on “Summer in the Sierra”