I only have a few moments to spare, but I am too excited to share some cat photos. Our Kruger NP guide tempered our expectations of seeing big cats. Of course, they are a big draw to the park for many, but our primary focus is birds and cats are hard to predict. His last trip missed seeing lions entirely. Leopards are the least social of the African big cats, so are often a tough find. My personal request was to see a Cheetah and he politely let me know that we had about a 10% chance of that happening. Well, we lucked out…to say the least.

Our first afternoon, we found a Leopard lounging and preening of the side of the road. My first encounter with a wild big cat was heart-pounding and breathtaking. They are just so beautiful. The cat licked his chops and watched us from a short distance off the road with indifference. He eventually strolled off after allowing us to take quite a few photos and just marvel in the moment. 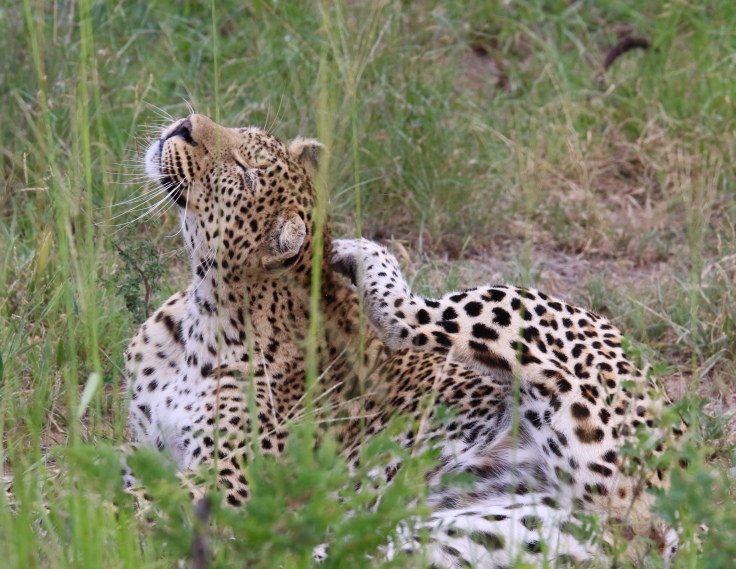 On our second day in the park, our guide received a tip amount a few lions sleeping under some shrubs some distance from the road. We headed in that direction and found the small group tucked in among grasses and shrubs. We watched tails flick and a stretched paw, but didn’t have the best views. After a while, a male stood up, stretched, yawned and sauntered a few feet before disappearing among the tall grasses. Again, I have yet to quite find words to describe this experience – but tears welled in my eyes as my heart raced.

I thought it couldn’t get any better. I was wrong. We explored a remote section of the park this morning, looking for a reported Black Coucal. While scanning the shrubs, a woman in our small group shouted, “STOP! LEOPARD!”. Well, that Leopard was a Cheetah, and behind her trailed two small cubs. The cubs were well hidden in the grass, but we could see the occasional tail flick. Our guide said our best chance to get a better view was to be silent and stay put and see if she’ll come toward us. I was skeptical as she walked in the opposite direction as my natural inclination was to follow her. Of course, he was right. Moments later she pivoted, started walking toward us, and eventually crossed the road right in front of our truck. Moments later, her two cubs warily followed suit. Ahhhhhh!!! It will take me some time to reflect and describe. Chills down my spine, heart pumping, and teary eyed — the awe we all shared was palpable. The guide grabbed his head with both hands and looked at us and exclaimed “….you guys have NO IDEA what you are seeing!!”. He has been visiting this park for 40 years and leading tours for 20. Seeing a Cheetah is a prized rarity, but Cheetah cubs?!?! Quite uncommon. 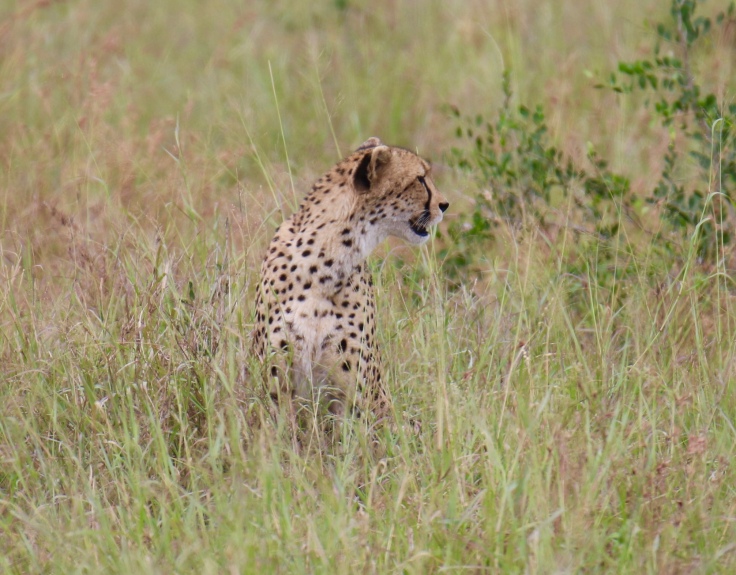 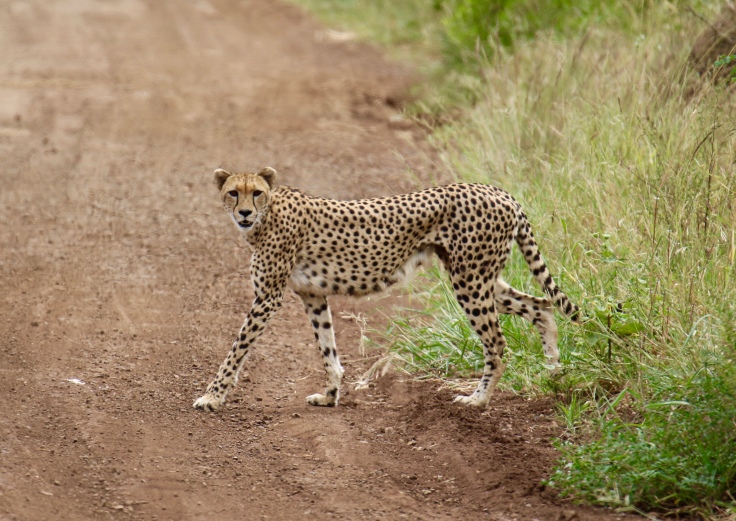 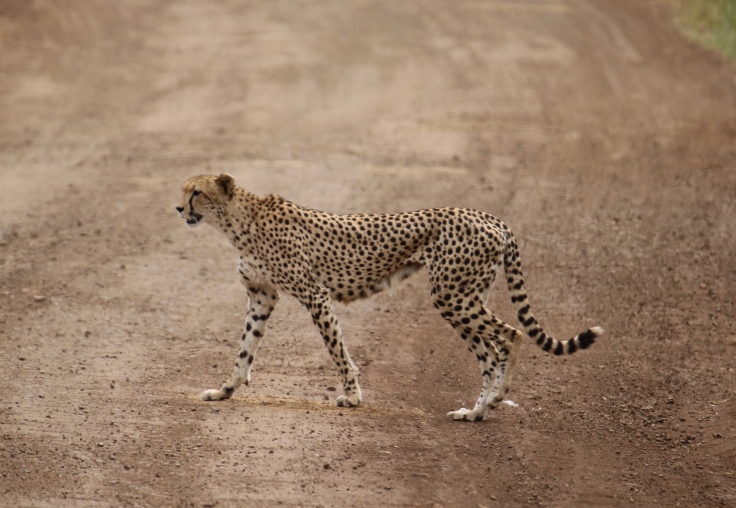 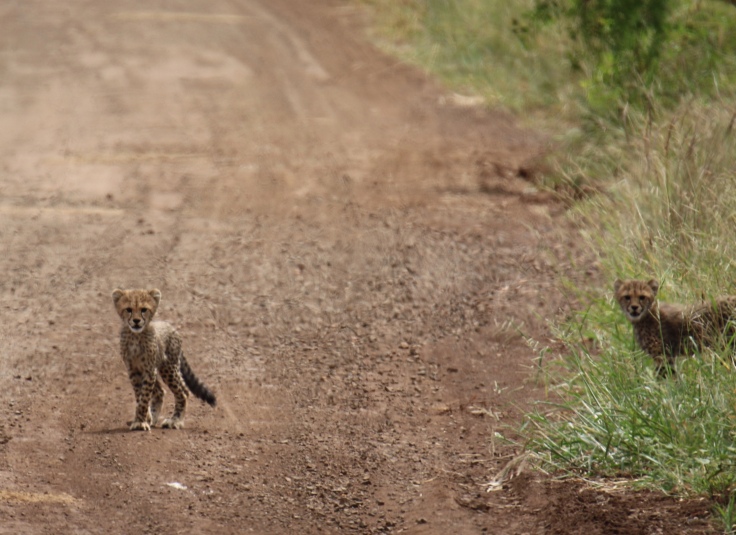 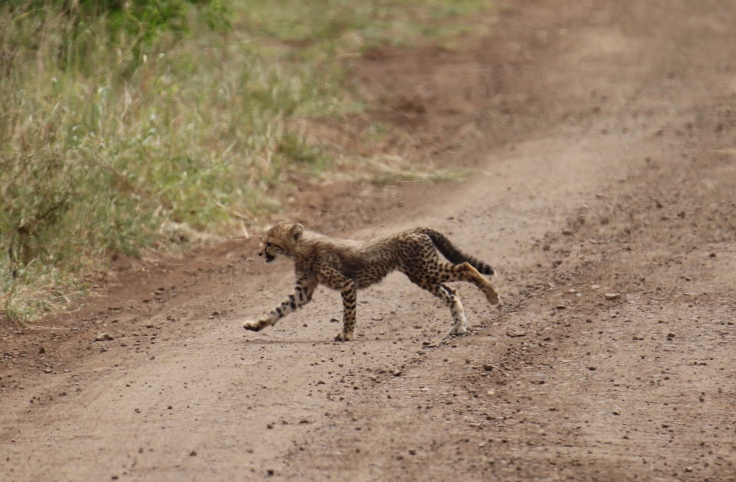 You’d think we’d be done. No. After the Cheetah and her cubs disappeared, we continued the search for the Black Coucal. After ~15 minutes of driving, someone spotted a lion in the distance disappearing behind an Acacia-dotted hill. Oh well, too far. We drove quite a ways passed where he had turned off, then heading in the direction he was walking, hoping we might be able to cut him off. We did….and the rest of his pride as well. In fact, that particular lion we had spotted was lagging quite a ways behind. We came across 3 males and 4 females crossing through the grassland and eventually through the road. A stunned Wildebeest watched it all. And, eventually, the original male caught up.

I have only been in South Africa for 5 days so far. This is just insane. Oh, and also, we were pretty much solo for most of these encounters. Kruger is notorious for road congestion in parts of the park where cars line up to see a reported lion or elephant or giraffe. Our guide shared our disdain for such situations and we all concurred that we’d rather go find a cool bird than sit in a line of cars straining to see a cat or other mammal. The park is huge and we stuck to the more remote reasons. With the exception of our last encounter with the large pride, we were pretty much solo for all of these moments. Just incredible. It is like nothing I have ever experienced. All I can say is….get yourself to South Africa and go to Kruger National Park!

2 thoughts on “A Big Day for Big Cats”