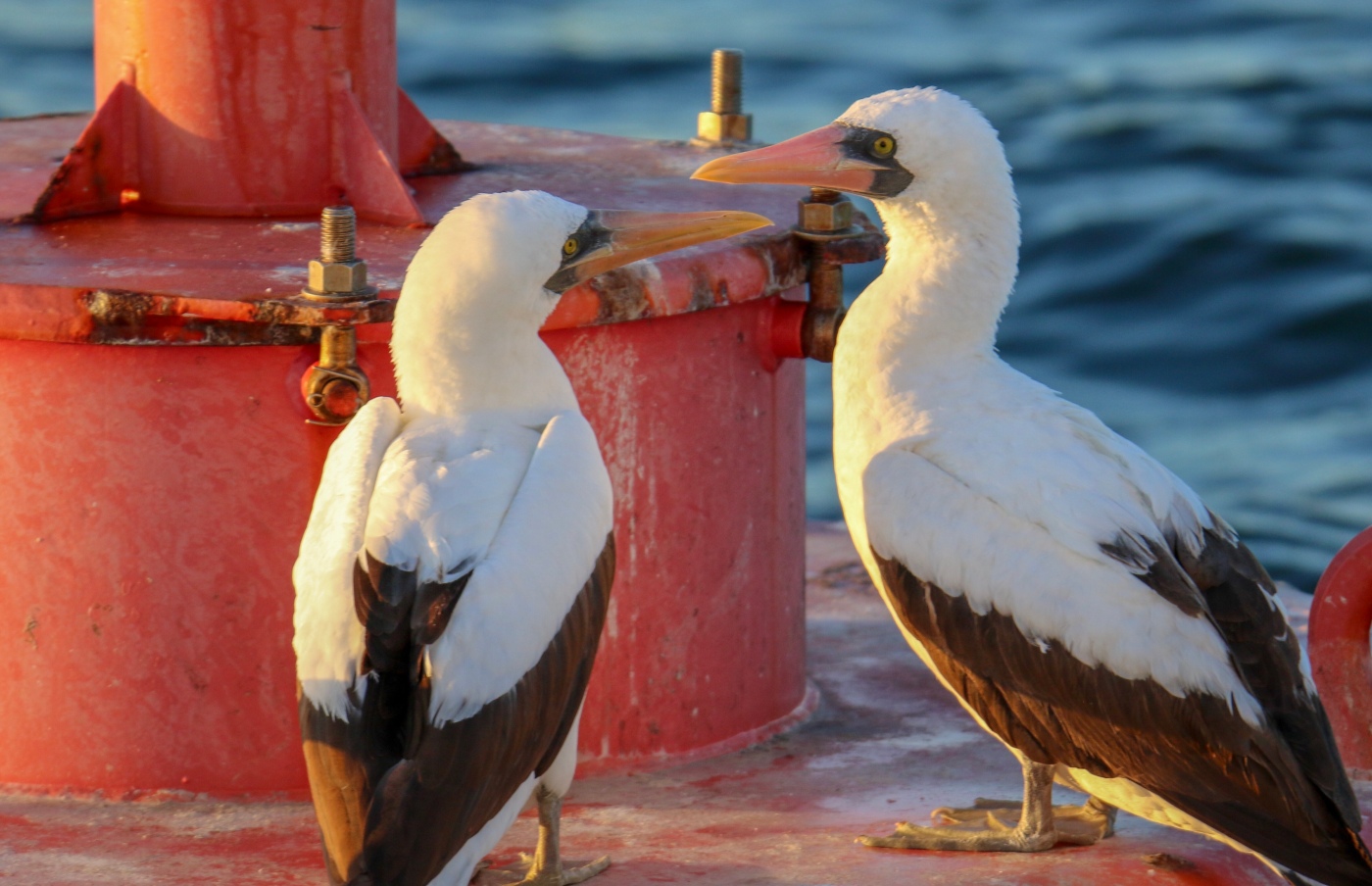 The San Diego Bird Festival was a fantastic few days of exploring San Diego and its birding hotspots. Despite living just a short distance north of San Diego, I seldom explore this portion of Southern California (instead, tending to indulge that constant northern pull on my heart strings).

I arrived just in time to hop on a bus for “Birding the Border”, led by Steve Ritt and Bill Thompson III (host of my two favorite podcasts: “Out There With the Birds” and “This Birding Life“). We spent the very chilly morning birding different spots within the Tijuana River Valley Regional Park, with a focus on California birds for the sake of the many out-of-state participants. Those that cooperated included California Gnatcatcher (pretty decent looks at a pair at the end of Monument Rd), a confiding Wrentit (more frequently heard than seen), California Thrasher, Hutton’s Vireo, and California Towhee. Personally, I was quite excited to hear a Rufous-crowned Sparrow, but hope to actually lay eyes on one in the future. We stopped for shorebirds at 7th St., along the Bayshore Bikeway, and were pleasantly surprised to find an American Flamingo foraging among some peeps. The origins of this bird are suspect and so far no zoos or persons have claimed ownership. This bird has intact wings and can fly, which lends some skepticism to the notion that it came from a zoo or hotel. The bird is tagged, and rangers are currently trying to determine the origin of that tag. Some flamingos from the Caribbean or Mexico are known to winter in Florida and Texas, but this bird would be WAY off course if it is not an escapee. The rain kept me from taking many photos on this trip, but we did have a few spectacular sightings at the Tijuana Slough NWR – a Ridgeway’s Rail swam across the channel and dipped in and out of the shoreline Salicornia and a Yellow-Crowned Night Heron napped. I’ve seen the juvenile YCNH at Bolsa Chica, but it sure was nice to see the beautifully plumaged adult.

Friday was the “Birding Big Day”, a fast-paced trip with the primary goal of logging as many species as possible in the county in one day. The morning was off to a cold and quiet start, but a short walk in Mission Trails Regional Park produced California Scrub-Jay, California Towhee, the “chi-ca-go” of California Quail, Anna’s and Allen’s Hummingbirds, and a few Fox Sparrows feeding on the trail’s edge. From there we made our way to Lindo Lake and this city park was super birdy! Uh, if you want to photograph BCNH, go there! Also, Greater White-fronted Goose, White-faced Ibis, a variety of ducks, and some passerines flitting about. We thought we had dipped on the known flock of Tricolored Blackbird, until we spotted a flock on a sign at the 7-11 at the corner of Mapleview. Definitely the last place I expected to see TRBL.

The cold weather kept things quiet at Dos Picos County Park, but we did manage to find an Oak Titmouse, a White-throated Sparrow consorting with two Golden-crowned Sparrow, and some lifer Purple Finches. Unexpectedly, someone in the group spotted an American Redstart and I managed to catch a photo of its tail. The remainder of a day was a whirlwind of target species – Ferruginous Hawks, Mountain Bluebirds, and a Bald Eagle on a nest on Rangeland Rd, Little Blue Heron, Tricolored Heron, terns, gulls, peeps, and plovers along the San Diego River, a Cackling goose and hordes of shorebirds at Bayfront Park, and a final stop at Attu Ave. to spot the pair of Nazca Boobies flying and plunge-diving about 1-mile off shore in the bay.

Saturday we took to the Laguna and Cuyamaca Mountains, covered in a dusting of snow. Birding was at a slower pace, which was quite nice after Friday’s chase. I love the mountains and I love mountain birds. At our first stop, Stonewall Mine in Cuyamaca Rancho SP, we quickly got on a beautiful male Williamson’s Sapsucker, hammering on a Jefferey Pine. He wasn’t the only thing hammering, Acorn Woodpeckers, Nuttall’s Woodpeckers, Hairy Woodpeckers and Northern Flickers rounded out the family! Near the Pioneer Mail Trailhead we had spectacular views of three Lewis’s Woodpeckers. These may be my new favorite bird (for now). I saw my first LEWO last summer in Wildrose Canyon, in the Eastern Sierras. I was solo and was pretty confident this was the bird I was seeing at the top of a sycamore (through my scope, in the bright light of midday), but I was thrown off by its flycatching behavior. Lewis’s Woodpeckers are unique amongst woodpeckers in that they rarely, if ever, excavate wood for boring insects. Instead, the glean insects from bark or flycatch. It’s quite impressive to observe these large woodpeckers jump from a perch, catch a bug mid-flight, and return to the same perch. Add to that, their eye-catching and spectacular plumage – their dark red face stands out next to a green-black hood, with iridescent green-black upperparts, a contrasting gray collar and breast, and bring pink belly. It’s probably also worth mentioning that these birds are named for Meriweather Lewis of the Lewis and Clark expedition! A day full of woodpeckers is a good day, indeed!

Sunday was on the water. A full day pelagic trip brought me 5 lifers (this was only my 2nd pelagic trip): Parasitic Jaeger, Scripp’s Murrelet, Northern Fulmar, Red Phalarope, and the bird-of-the-day….Fork-tailed Storm-Petrel!! Afterwards, I hopped on a second boat to cruise through the San Diego harbor in hopes of getting a better look at the pair of Nazca Boobies. We were in luck, as they perched on Buoy 34 just before sunset. These large, colonial seabirds are rarely spotted outside of the Galápagos Islands chain, but this pair has been seen in the San Diego Bay every day since December 11. It is suspected that they hitched a ride on a ship transporting banana from Ecuador. They are not at all far from the ocean, and certainly fly high enough to be able to see the ocean from the bay, but they seem to bound to the bay for the time being. I hope to one day visit the Galápagos Islands someday but, in the meantime, I will take whatever little bit of it I can get! 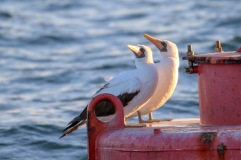 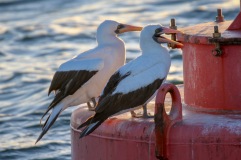 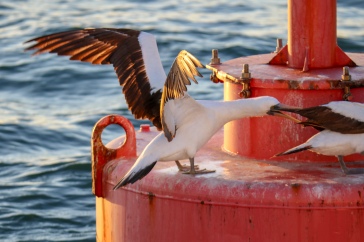 I so much enjoyed all of the festival trips and all of the birders I met along the way. Bird festivals are unique experiences, and I definitely recommend it. With that said, it sure was nice to wake up Monday morning and head out for some solo birding. I had some incredible stops en route to Anza-Borrego State Park. A strikingly beautiful Painted Redstart put on quite a show for me at Crown Point Park. From there, I made my way to the Ramona Grasslands Preserve for a much-needed solo hike. The landscape is dry and although no flowers are blooming the scattered oaks made for lovely views. I was lucky to find a Vesper Sparrow, after closer inspection of what I assumed was a Savannah Sparrow, and a Rock Wren posed cooperatively on a rock, of all places. I had a snack under a majestic oak filled with chattering Lark Sparrow who occasionally popped their harlequin-patterned faces out. The highlight of the hike – a Western Screech-Owl in an oak cavity.

Up Next: Anza-Borrego State Park (and how enjoyable it is to hike mid-week instead of going to work).